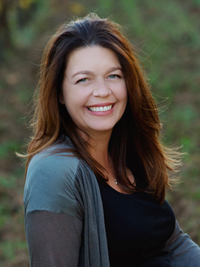 Luisa Ponzi graduated from Portland State University, Portland, Oregon in 1990 with a Bachelor of Science. Following her undergraduate studies, Luisa moved to Beaune, France where she continued her education in viticulture and enology. As part of the required curriculum, Luisa apprenticed with Burgundian producer, M. Christophe Roumier of Domaine Roumier of Chambolle Musigny, France as well as with Italian producer Luca Currado of Vietti in Piedmont, Italy. In 1993, Luisa was awarded the Certficate Brevet Professionelle D’Oenologie et Viticulture, at the time the only woman to earn such distinction.

In addition to her formal studies of enology and viticulture, Luisa has traveled extensively throughout other prominent wine regions including Australia, New Zealand, Germany, Italy, Austria, Slovenia and the United States. Since 1986, she has participated in all the International Pinot Noir Celebrations in McMinnville, Oregon and has attended all of the accompanying Steamboat Technical Pinot Noir Conferences.

Luisa combines her formal winemaking experience with her lifelong work with her father, Dick Ponzi, at their Willamette Valley vineyards and winery. Since 1993, Luisa has brought her knowledge of Burgundian practices combined with her personal experience to the family-owned winery.

Luisa continues to educate herself through contacts with winemakers around the world, frequent winery tastings and winemaking conferences. She currently sits on several advisory and wine organization boards.

Luisa has been honored with awards and accolades, all contributing to Ponzi’s heightened stature in the national arena.

She, her husband, fellow winemaker Eric Hamacher, and their four children reside atop Chehalem Mountain with commanding views of the glorious valley.

“Luisa Ponzi... one of the brightest stars among the new generation in Oregon.”
- Paul Gregutt, September 2011

“By adding academic knowledge to her unparalleled experience learning from her father, Luisa Ponzi has become one of the most formidable winemakers in the country.”
– Oregon Wine Report, June 2002 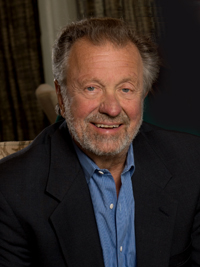 Born the third son of an Italian immigrant couple in 1934, Dick Ponzi was raised in Michigan. Typical to most Italian families, meals were considered sacred. Wine was always served and made at home. The flavors, sensations and values of Dick’s family traditions followed him throughout his life and professional ambitions.

Following high school graduation, Dick worked a variety of jobs, including employment with the Ford Motor Company, to support himself through college. He graduated from the University of Michigan, Ann Arbor, with a Mechanical Engineering degree in 1959. He immediately moved to California where he worked in the aerospace industry as a structural design engineer. Later, he founded Seroc Corporation in Los Gatos, California, and designed and developed equipment to process light-weight, high strength building materials. Dick also held the position of project engineer for a firm that designed and fabricated theme park rides for Disneyland and Disney World.

In 1969, he moved to Portland, Oregon and founded Ponzi Vineyards one year later, one of the premier wineries in the state. From the first vintage in 1974, Dick has set the standards for enological and viticultural innovation. His mechanical engineering background has proven a great asset through his many years of winemaking. He fabricated machinery and winemaking techniques in his cellar that are now commonplace in many wineries across the globe. He planted some of the first Pinot noir in the Willamette Valley in the late ‘60’s, and some of the first commercial plantings of Pinot gris in 1978. He has guided plantings of cool-climate varietals throughout the valley since the early 1970s, encouraging others to join him in planting and building a quality wine industry in Oregon.

In 1984, he and his wife Nancy founded Oregon’s first craftbrewery, BridgePort Brewing Company. Ponzi designed and fabricated the first craftbrewing system in the state, a system which has since been duplicated several times over by craftbreweries across the country. In 1998, Dick and Nancy founded a culinary center in Dundee — encompassing the Ponzi Wine Bar, a regional wine tasting room, and The Dundee Bistro, a local restaurant that features fresh Willamette Valley cuisine.

Constantly innovating, designing, constructing and crafting, Dick’s latest pursuit satisfies a 40-year-old dream of creating a state-of-the-art, sustainable winemaking facility. The new winery was complete in 2008. Outside the family business, Dick devotes a large part of his time to a multitude of other interests—one he most treasures is time spent with his eight grandchildren. 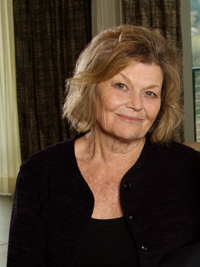 Nancy was born in Southern California, but grew up all over the world. Her father worked in the oil business, which took her to exotic areas of the globe like the jungles of Venezuela, the San Angel District of Mexico and the Ozarks of Arkansas. She studied at The University of Mexico, Mexico City; El Camino College and West Valley College in California. In Palo Alto, she completed the Association Montessori Internationale Primary Education Course. Her emphasis was in Spanish, English and Primary Education.

She married Dick Ponzi in 1961. Their mutual love of food, wine and family made their union “storybook” and naturally lead them down a path overwhelmed with the culinary arts. An overly ambitious woman, she has a steady record of taking on “never before attempted” projects and gracefully turning each of them into great successes.

Before moving to Oregon, she held offices in the Pan (Latin) American Round Table and was a teacher’s assistant at the Villa Montessori School in Cupertino, California. In Oregon, she continued teaching at West Hills Montessori School. At Portland Community College, she taught yoga, wine appreciation, ethnic and basic cooking. Her culinary classes extended to local cooking schools, television shows and a weekly wine show on the radio. Teaching was only one of many activities Nancy pursued after replanting the family in the Willamette Valley. She co-founded The Consumers’ Food Council, which promotes environmental concerns of food and agriculture and the then novel concepts of recycling, ingredient labeling and a legal definition of organic. This led to becoming a registered environmental lobbyist at the Oregon Legislature. She wrote a weekly column for the Hillsboro Argus, was President of the Washington County Women’s Federation, held various offices in the Oregon Winegrowers Association and was a founding Director on the Board of Washington County Visitors Association.

An exceptional and committed mother of three, Nancy not only raised them, but concurrently managed a small farm complete with chickens, goats, horses, ducks, geese and cows (Scottish Highlanders, no less). All this while building the family’s wine business and helping to create a foundation for the state’s wine industry.

In addition to being one of the first marketers of Oregon wine in the country, she was a founding Director of the Washington County Wineries Association and was instrumental in establishing the Oregon Wine Advisory Board. Nancy has contributed to the conception and establishment of Oregon’s most successful wine events and has played a vital role in promoting the Willamette Valley as a viable wine region. One of the most widely recognized events is the International Pinot Noir Celebration. This is Oregon’s premiere wine event which brings together winemakers and aficionados from around the world to discuss, taste and explore Pinot noir. Nancy also co-founded ¡Salud! The Oregon Pinot Noir Auction, a hugely profitable fundraising event of unique cuvées from Oregon’s most prized vintners. All proceeds provide low cost healthcare for vineyard workers and their families. Most recently Nancy helped found Oregon Pinot Camp, an exclusive event that privately invites the wine trade to the valley for three days to learn “first hand” about Pinot noir.

In 1998 she helped to found the Ponzi Wine Bar in Dundee, showcasing some of the region’s very finest wines alongside Ponzi wines. In 1999, The Dundee Bistro, one of the area’s most successful regional restaurants was born under her direction. Both the wine bar and bistro have become the center of wine country, inviting travelers from around the world and neighboring winegrowers to enjoy the marriage of regional food, wine and good spirit.

In 2009, Nancy released The Ponzi Vineyards Cookbook, a compilation of her most treasured recipes and stories about running a winery and raising a family. Nancy remains active in most Oregon wine industry promotions and is integral to marketing Ponzi and the region. Her current focus, in addition to caring for and nurturing her eight grandchildren, is overseeing the culinary program at The Dundee Bistro. 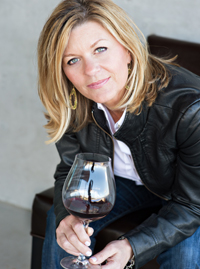 Anna Maria Ponzi is Past President, Director of Sales and Marketing, Second-Generation Vintner of Ponzi Vineyards, perched atop the Chehalem Mountains in Oregon’s Willamette Valley. For nearly 30 years, Anna Maria and her sister—Winemaker Luisa Ponzi—have been operating the winery founded by their parents in 1970. Together, they have grown the business into a wine-industry leader farming over 140 acres of certified sustainable vineyards and experimenting with innovative agricultural methods to grow new wine varietals.

Anna Maria is actively involved in philanthropic organizations and events. She is currently a commissioner on the Oregon Tourism Commission and Vice President of the Oregon Wingrower’s Association. She has served extended terms on the Oregon Wine Board, Oregon Pinot Camp, the Willamette Valley Wineries Association, and ¡Salud! Her roots as the daughter of a pioneering wine family give her the strong advantage of being educated in all areas of the wine business. This unique experience and skill set allows her to serve the state’s wine industry in a myriad of ways, including acting as an ambassador for Oregon wine growers internationally and building Oregon wine country into a travel destination. She released her memoir “Pinot Girl” in the Spring of 2020 in celebration of the winery’s 50th anniversary.

In 1987, Anna Maria graduated from the School of Journalism at the University of Oregon. She moved to Boston and worked in the publishing industry before returning home to the wine business in 1991, when she took the position of Director of Sales and Marketing at Ponzi Vineyards. The following year, she became a founding member of Women for Winesense and became President of the Oregon chapter.

In 2012, Anna Maria and her sister Luisa acquired ownership of the winery from their parents, and Ponzi Vineyards became one of the country’s few sister-run wineries and one of Oregon’s few secondgeneration wineries.

The following year, Anna Maria opened an elegantly modern tasting room, establishing Ponzi Vineyards as an exceptional wine country destination. She assumed the position of President in 2014, overseeing all business operations. Under her steadfast leadership, natural business savvy, and tireless work ethic, Ponzi Vineyards is experiencing continued growth and success as one of the nation’s most respected producers in the region.

In Spring 2018, The Laurelwood was unveiled, a one-of-akind hospitality space that pays homage to her parents’ legacy while looking forward into a prosperous future. Pulling from a history of innovation and sustainability, Anna Maria is focused on continuing to forge a path onto the global stage for other regional wineries to follow. 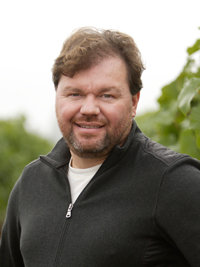 For over twenty years, Michel Ponzi helped grow the family winery from a garage-based operation to its current state-of-the-art operation. The business thrived through his contributions as he introduced technological innovation and infrastructure to the growing company.

In 2012, Michel stepped down from his position to pursue lifelong passions. He now resides in Italy with his wife and two children, and owns and operates The Dundee Bistro and Fratelli Ponzi Fine Food & Wine in Dundee, Oregon.